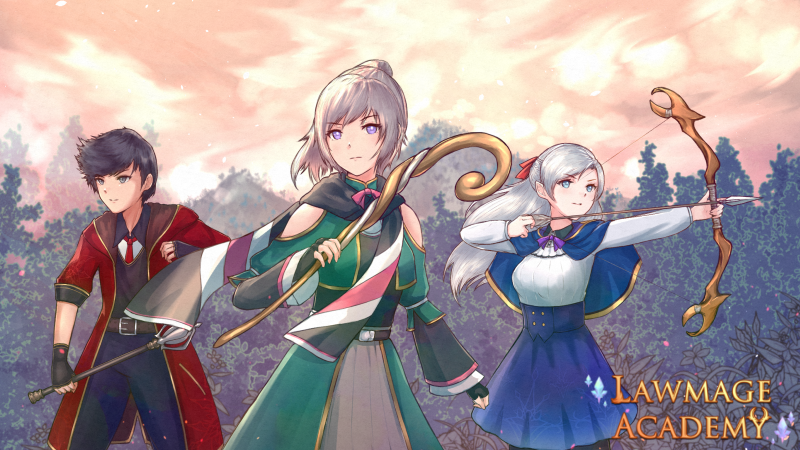 The Lawmage Academy presskit has been updated.

The zip file contains the new promotional art, updated trailer, and updated gameplay gif. You may use it for your videos, social media posts, streams, and articles.

Thank you so much for your support!

When I first played Lawmage Academy, I thought that the gray part of female Syle's outfit was part of the robes but looking in the promo3_full file in the Presskit shows it's actually a skirt and the colored robes (depending on House) is worn on top of the skirt. Also likewise, it may appear that the sleeves on female Syle's outfit are detached similar to the Soulstice Mentor but the main menu and the drawings show they're actually attached. It's understandable that the RPG Maker graphics, especially the default graphics from RPG Maker VX Ace and earlier, usually don't have a lot of detail due to their lower resolution though your character graphics do show some detail such as Alyssa's outfit.

Also I was curious if you could fail classes since Circon mentions that you can fail classes and exams, and the Quest screen shows a "Failed" list. I think Syle can miss classes especially if there aren't enough days to do all the classes but I am not sure how Syle could fail classes since all the classes just cutscenes with some choices with only Charms requiring Syle do anything although it could Lawmage Academy's way to teach players about item crafting which is famously used in Minecraft and Terraria. It could be possible for missions where Syle needs to fight a monster or do a task and losing would send Syle to the infirmary. However, I believed losing the required/story battles will end in a game over instead.

In the current demo, the only classes you can fail are Combat Basics (temporary) and Charms of Nolienne which is a limited time event. In the future, it's possible to fail other classes especially the field mission ones.