For this update, minor bugs and typos were fixed along with a reworked Autosave feature. There is now a separate slot for the Autosave slot.

WARNING: For existing save files, there is a chance that your save files were corrupted. You will be able to load the game, but you won't be able to save in that file. The only fix I've found so far is to start a new game.

I deeply apologize for the inconvenience caused by this. Do let me know if the issue still persists after starting a new game.

As always, I am open to suggestions and feedback. Let me know your thoughts in the comments!

Thank you very much for playing Lawmage Academy!

The Felskis autosave plugin seems to be an improvement over Yanfly's Autosave plugin where it provides its own autosave slot similar to RPG Maker MZ although unlike the Yanfly plugin or the VisuStella SaveCore plugin for MZ, it doesn't include an option to toggle the autosave. Additionally, it has options to control when it autosaves and perform an autosave through a Plugin Command which is not possible in MZ without using VisuStella's Save Core (in MZ, it only autosaves between map changes and after battles).

Yes, some older saves may not work with the plugin but it works fine with new games (although 0.6 and possibly older saves don't work in the Fairy Forest due to Lawmage Academy looking for a file that's not there).

I noticed that every time you get a quest in Lawmage Academy, the game opens the menu to the quest you started. It can seem helpful but you have to hit Cancel 3 times to dismiss it and return to the game. I suppose an alternative would be using a notification (which would require a plugin like Yanfly's GabWindow or Arisu's Notification Window) to announce the quest is started similar to games like Fallout 3, Fallout: New Vegas, and The Elder Scrolls V: Skyrim although the player would need to manually open the Quest Menu to view the quest and objectives. I have used a similar system but I wanted to allow players to open the Quest Menu when the Notification appears. This is what I did using 2 Common Events: 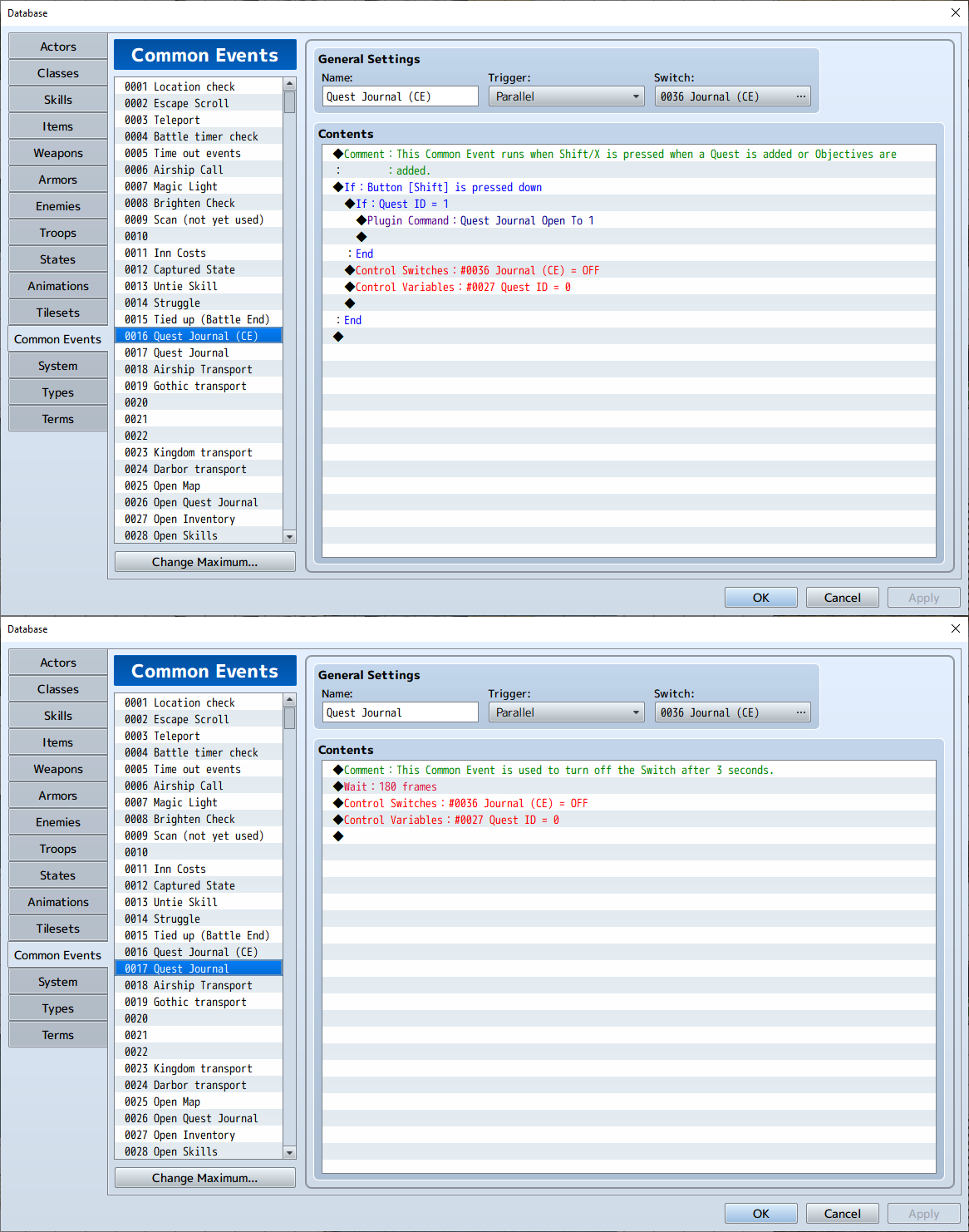 I remember you mentioning that Syle would be called Syle regardless of name which you fixed. I believe you may have used Syle instead of \n[x] (x being the ID of the Actor) to print out Syle's name.

Thanks for the suggestions! You've been really helpful.